This post is sponsored by WASP Paintball Perth. The opinions expressed here, however, are my own.  Photos courtesy of WASP Photography.

I’m not really into the great outdoors. I don’t like getting dirty and I really don’t like getting hurt (a consequence of my upbringing). But at the same time, I have grown as a person over the years and I really like stepping out of my comfort zone and giving things a go – even if it is something that I might not like. When I was invited for a game of paintball, I was immediately keen and excited. This is definitely out of my comfort zone! We were very lucky to play with WASP Paintball at their Dizzy Lamb Park field.

On the morning of paintball, my enthusiasm and excitement turned into a little apprehension and I remembered the bit about how I don’t like getting hurt or dirty. Before I knew it, my group and I were all wearing our safety gear and having our first practice shots. As I walked out onto the field and realised what was about to happen, I felt even more nervous.

The first thing I learned about paintball is how quick it is. The Ref who supervises the game set a scenario and then we were off!  In the first game, I hid behind some barrels and when the shooting started, I dropped my gun and started squealing! The guns were so loud and seeing all those paintballs come flying across the field towards me was quite overwhelming!

It didn’t take long for me to get shot by the other team. It was bound to happen because I had no idea what I was doing. I got hit in the shoulder but was pleasantly surprised to find that it didn’t hurt much at all. Paintball only really hurts when you get hit at close range. This realisation made me a bit braver. 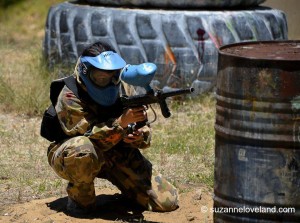 In the second scenario our team was placed in, I decided to not go out there by myself and hid with my husband behind a wall. I was enjoying being a sniper and firing at the other team from far away when all of a sudden, my husband shouted “COVER ME!”. I had no idea what he meant by that so I just sat there and watched while he ran forward across the field as paintballs were fired at him. He managed to not get hit and I was very impressed.  He wasn’t all that impressed when he explained to me later what ‘cover me’ on a paintball field actually means.  Ahhh. Yes. I get it now.

There was another scenario where I had to protect the ‘medic’ on our team. This guy is a good friend of ours and well over 6 foot. As we stood behind a hut, he said to me, ‘shoot through this gap here!” I couldn’t actually reach to see through the gap let alone get my paintball gun up there so he grabbed my gun and fired at a couple of players on the other team.

As the games went on, I became a lot braver and pushed forward on the field. I became so enthusiastic with my paintball gun that I accidentally shot the Ref twice.  (Sorry about that Chris!)

When it was all over, I felt hot and dirty but extremely happy that I had experienced paintball. It was  much more fun than what I had expected and really nothing to be scared of. Here are just some of the things I learned from the day:

So now I can cross paintball off my list of things that I wouldn’t normally do. Life has so much to offer and it is so important to give things a try. Stepping out of our comfort zones enables us to learn and grow and to discover new and exciting experiences. And you never know – you might find something new that you really enjoy!

Have you ever been paintballing? Is there something different and new you might like to try in 2015 that is out of your comfort zone?  Go on! Give it a go!